What is the Big Deal About Fracking? 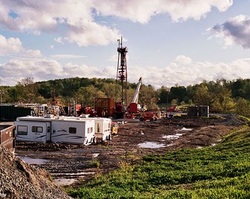 We’ve all heard of “fracking” (hydraulic fracturing for gas).  We’ve heard about this booming industry and how it may threaten drinking water supplies.  The lure of “energy independence” and plentiful jobs has fueled this boom, but what is the environmental and social cost?  Have we learned nothing from Fukushima?

I want to introduce you to Greg Carroll, West Virginia State Historian.  Greg has watched the growth of this industry.  He owns land near Charleston and wanted to share some of what he has seen and learned:

“I live on a ridgetop at the end of a long road.  We have had gas wells along our road for 40 years but those were traditionally-drilled wells, not frack wells.  Fracking is somewhat newer.   There is a lot of drilling all over the Northern part of the state (West Virginia).  Hundreds of frack wells being planned or in operation.  This is a gigantic problem.  Around here you can own the land but usually you don’t own what is under the land.  Those are called “mineral rights” and they are owned by the big corporations.  If the gas company wants to build a frack well on my land they can just come and do it whether I like it or not. The mineral rights in this state are a nightmare…coal and gas and timber and railroads have been destroying areas for 150 years.

” The worst part is the water problems.  For each well, millions of gallons of water…YOU HEARD ME RIGHT… and 5000 pounds of chemical compounds, loaded with carcinogens like diesel fuel, benzene and hydrochloric acid and 750 others (often secret) are injected into the ground to fracture the rock.  Then 70% are pumped back out and trucked to  storage wells or open “frack ponds” which are like giant cesspools where they just sit.  (and where does the other 30% go…could it eventually pollute groundwater and wells and streams?)  I have seen actual local TV footage showing a homeowner’s tap water literally going up in flames when he strikes a match next to it.  Methane gas in the well water.

“The roads are torn up in many counties by the constant hauling of heavy equipment, millions of gallons of water and hauling off storage liquids.  The air pollution is very bad and they can drill only a few hundred feet from peoples’ houses.  The noise is unimaginable.   One of the DIRTY SECRETS that no one wants to talk about is that LARGE amounts of radioactive dirt is being brought up from deep below, radon and radioactive dust.

“Sure, fracking does bring some jobs and money into the state, but not as many jobs as it seems.     They bring in trained crews from Texas and Oklahoma; the unions here are trying to get them to hire more local

folks.  Much of the work is only temporary and the longterm environmental costs are great.

“I work with the WVA Citizens Action Group and we started a Surface Owners Rights Organization (SORO).  Go to wvsoro.com to check it out.  I am a longtime member and supporter of the WV Environmental Council and the Ohio Valley Environmental Council.  We are trying to teach landowners to stand up for their rights and to encourage the legislature to do a better job regulating and inspecting.”

Way to go, Greg.  As people learn more, and as this fracking increases, it will become bigger and bigger news.
So blog readers, what do you think?  Can you add to this discussion?  Your opinions count, so now is your chance to tell us how you feel by commenting below.    To see some great videos and a photo gallery of what fraacking looks like up close and personal, check out this link:  http://www.wvhostfarms.org/photo-gallery.html
Return To Blog Posts