“We have lots of competitors but very little competition” 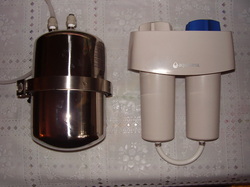 I got a call from a homeowner who wanted me to come put in a Multipure Water Filtration System under their sink and take out another brand they had used for while.  When I asked why they told me that their other system had sprung a leak for the second time and they felt it was cheaply made.  They wanted something more reliable and liked the Multipure stainless steel design.  (See photo  and compare the stainless steel Multipure on the left to the white plastic model.)

When I arrived, I saw that the brand they had was something called the Aquasana.  It is one of our major competitors, highly visible when you search “water filters” on the internet.  There is much paid internet advertising for the product.  But I had never actually seen one up close.

I was shocked at what I saw.  The plastic housing was thin and flimsy, very cheaply-made.  No wonder this customer had experienced cracking and leaking!  .  When I looked  up consumer reviews in Amazon for the product, there were numerous stories about similar mishaps and floods.  A water filter flood can be fairly catastrophic and cause thousands of dollars of damage to floors, furniture and even lower apartments.

So I decided to investigate further and here’s what I learned:  Aquasana does indeed have very good certification for removal of many contaminants.  But they only provide a one-year warrantee vs. lifetime from Multipure.  Their flow rate is only half of what Multipure provides.  They use two very small twin cartridges that each have to be changed twice a year ($60 x 2 = $120/year) whereas the Multipure is only $69 a year and only requires one filter.

Look at the side-by-side photo to see the comparative mass of both products.  The one on left is one of a set of two Aquasana  cartridges.  The Multipure (on the right)  is substantially more filter for the money and does a better job with less maintenance.

I used to run marathons for the challenge.   For me it was just a hobby; my times were modest.  I ran Boston three times, so technically, I competed.   Bill Rogers and Alberto Salazar and Greg Myers were the champions in those days.  I competed, but I was never really much competition for them.  My Multipure mentor, Don MacCrossen used to tell me:  “Like those champions, Multipure has lots of competitors but no real competition.”