Folks who live in New England affectionately refer to it as “The Cape”.  My brother in Texas, the family shtick maven, calls it “The Cod”.  Home to countless beautiful beaches, ponds, wildlife, fishing towns and year-round villages, Cape Cod is the place to go in the summer for healthy recreation.  Tourists come to swim in the waters of the ocean, the bay, and the many ponds but tend not to think or know much about the problems with the drinking water.  Long-time residents know better. 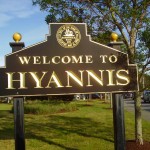 Just weeks ago, I read a newspaper article in the Cape Cod Times about water woes in Hyannis, the biggest town/city on the Cape.  In mid-May, responding to reports of higher-than-acceptable levels of perfluorinated compounds (PFCs) and dioxane in two of the town’s 11 wells, Hyannis shut down those wells.  Coming as this news did right at the start of the busy tourist season, town officials were eager to get ahead of this story and take prompt emergency corrective action.

I understand from my association with Multipure that solid carbon block filters are highly effective and give consumers a way to protect themselves at their kitchen sinks. This is one obvious and easy thing people can do. What I wanted to learn was how this problem came about and what Hyannis was doing about it. 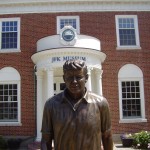 When most Americans think of Hyannis, they think of the extended Kennedy clan, their large waterfront compound in Hyannisport, a smiling young President playing touch football, bouncing John-John on his knee, sailing with his brothers out on the ocean. It was the site where the family relaxed, where they celebrated political victories, and the place where they grieved their tragic losses.

It goes without saying that before you can offer a solution, it’s a good idea to get an accurate understanding of what the problem is.  That was my goal when I went to Hyannis last Thursday.  I wanted to learn more by talking to residents and listening to their stories.  I wanted to see the contaminated well sites first hand and get a better understanding of the geography/geology.  I wanted to talk with experts.   This blog is my attempt to share what I learned.

Almost all the drinking water on Cape Cod comes from ground water, from public town wells or private wells. The water table is a shallow one, and the ground is porous and sandy, slightly acidic. Contaminants produced by commercial, agricultural and personal use activities can easily end up in the groundwater, and the sandy soil is not very effective at filtering them. Since 85% of the Capes’s residences rely on septic systems that can leach pollutants into the ground, the entire Cape is at risk.  Pollutants travel underground, unseen.

Indeed, when the environmental research organization Silent Spring sampled 20 wells (public and private) five years ago, they found traces of many emerging contaminants in all of them, contaminants like prescription medications (from septic system overflow), flame retardants, insect repellants and industrial chemicals). They found higher than acceptable levels of PFCs (perfluorinated compounds) in the Hyannis well water–Hyannis was in the top 1% of PFC samples in the country.

Where did the PFCs come from? How high a level were they? What are the possible health effects? And what could be done about it?  These were the questions I had when I drove up to the Hyannis water department last week. Once inside, I was introduced to Hans Keijser, Supervisor of the Water Supply Division. Hans graciously invited me into his office, pulled down some maps and spent 1/2 hour answering my questions and sharing his plans to protect consumers. 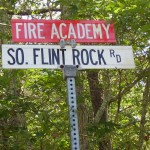 Hans told me he thought the PFCs came from firefighting foam used for years at the nearby Barnstable County Fire Training Academy. There are 11 wells that Hyannis uses. The two polluted wells, called Mary Dunn Wells #1 and #2, are just downstream (underground) from the Barnstable County Fire Training Academy; Hans pointed to the maps on his wall to show me how close it was. And even though the academy stopped using the foam two years ago, it persists in the groundwater. 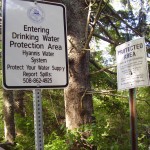 I visited the well sites. Set back off a little traveled road through a wooded area of scrubby trees, there was nothing remarkable to see other than occasional signs designating this as a “protected area”. Underground pollution is hard to see! Also nearby was the Barnstable/Hyannis airport, thought to be the source of another pollutant, dioxane, which Hans said was more difficult to treat.

Perfluorinated compounds (PFCs and PFOS in Hyannis’ case) are on an EPA watch list.  EPA has not yet set a standard or maximum contaminant level. It is considered an “emerging contaminant” rather than a regulated one. There is an advisory as to how much is acceptable. One of the Mary Dunn wells was just over that number, and the other almost twice the acceptable level (.3 parts per billion and .7 ppb). Now those are still mighty small amounts–maybe equivalent to a drop of water in an Olympic-sized pool).

It is suspected that drinking higher levels over a lifetime could produce hormonal changes, promote certain types of cancer, yield low birth weights, interfere with the immune system and possibly cause liver problems. Very little is known about low levels. That is true for most of these new “contaminants of emerging concern.” I think it is to the credit of the EPA and people like Hans that they are trying to be proactive, to get ahead of the curve and act before all the final science is in.

Hans first heard about the problem from Laurel Schaider, PhD., leading researcher for Silent Spring. When the concerning numbers were presented to him, he chose the path of transparency, sharing the bad news with town officials. Then he embarked on consultation with water experts to better understand the problem and assess the risks. He talked to engineers and planners and came up with a strategy. Hyannis shut down the two contaminated wells right away, using water from the other nine wells and an interconnection with neighboring Yarmouth to provide continuous unaffected water to consumers. So for residents, there was no interruption in water service and no dramatic alarm.

The Town Council met and declared an “emergency” situation, which allowed them to authorize money and remedial action and shortcut some of the bureaucratic inertia. The council approved purchase of two carbon filtration systems to remove the PCFs at a cost of $744,000.   They are expected to go on line by the beginning of July. So from the time of discovery to activation of these two filters, it took 6 months, with no interruption in service to Hyannis consumers. Thank you, Hans, and thank you to the water department and town council for taking corrective action.

Still lurking in this story is the ongoing problem with another chemical, 1,4-dioxane.    It, too, was found in these wells, and to this date there seems to be no easy answer as to how the municipality can treat to remove it. Dioxane is a solvent and a solvent stabilizer often used for de-icing and cleaning purposes at the nearby airport. EPA studies suggest that it is a possible carcinogen in laboratory rates with much more research needing to be done to establish toxic effects on humans. What will Hyannis do about this problem? 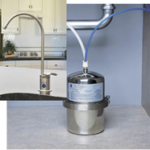 As a consumer, I know what I would do. Install a Multipure Drinking Water System to give my family the best chance for protection. In a 2009 study conducted by the Minnesota Department of Public Health, solid carbon block point-of-use filters were found to be effective in reducing the levels of PFCs in drinking water. They tested 11 different  filters and one device using a solid carbon block filter identical to our CB6 filter–was found to reduce PFCs to below reporting level.

It’s no accident that the Barnstable Town Council spent $745,000 to install carbon filtration units for the polluted wells, and we all know that Multipure is the best carbon filter out there for home use.

In March, Multipure was certified under NSFs newest standard 401 to reduce “Emerging Compounds”. This standard was developed to cover contaminants such as prescription drugs, over-the-counter medications, herbicides, flame retardants and more. These are the kinds of pollutants that are showing up not only in Cape Cod’s water, but in drinking water all over the country.