The recent toxic spill on the Elk River in West Virginia polluted the water for 300,000 people and one month later, most people are still choosing not to drink their tap water.  And then there was the coal ash spill on the Dan River in North Carolina.  Lots of BAD NEWS.

So I wanted to find a GOOD NEWS story, and found one right in my own backyard.  The Charles River is a great story and symbol of hope.  What once was a stinking, nasty waterway is now an ecological and recreational gem, thanks to collaborative efforts by the Massachusetts Department of Conservation and Recreation, the MWRA, the Charles River Watershed Association, and the Clean Water Act of 1972.

When I first moved to this area in the mid-sixties, this river was the brunt of jokes and people tried to avoid it.  It was said that if you fell in the river you would have to get a tetanus shot.  The Standell’s big hit song went:  “Well I love that dirty water…Boston you’re my home.”  That song is still an anthemn of Red Sox nation and is the victory song at Fenway Park!

The Charles River starts near Hopkinton (where the Boston Marathon begins) and winds its way for 81 miles down through 23 towns and cities, divides Boston from Cambridge and empties into the harbor.  For years it had been polluted by sewage overflows, textile and industrial mills, a paint factory, slaughterhouses and even a weapons arsenal along its banks  (West Virginia’s recent story echoes this history).

Then, with the new environmental movement and the Clean Water Act of 1972, things began to change.  Creative activist involvement and interagency collaboration took hold.  New regulations and engineering projects began to reduce the sewage overflows and eliminate other toxic threats.  Fish and birds and wildlife began to return.

In 1996 Governor William Weld took his famous plunge into the river to dramatize the improved conditions.  Recently, as bacteria levels continued to fall, the river was declared to be “swimmable” about 54% of the time.  After heavy rainfall, it is more problematic since storm runoff may cause temporary problems with water quality.

There are still problems to deal with:  Heavy metals and other sediment remain on the bottom of the river, so swimming off a shore is not allowed for fear of stirring things up.  Continued suburban population growth and development present new challenges.

Nowadays in Boston, people seek out the Charles.  They boat on it, they picnic next to it, they jog along its banks and occasionally they swim in officially-sponsored events.  The herring have returned, and even sturgeon!

So whether we are talking about the Charles River, or the Cuyahoga, or the Hudson River, or even the Elk River in West Virginia, good things are possible when people get their priorities straight and put their money where their mouth is.  Way to go, Boston! 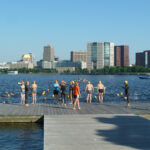