Purifying Rainwater Down on the Farm: an interview 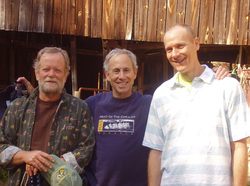 Goldfish, bluegills, dead rabbits, woman’s nylons–what’s any of this have to do with drinking water?  To find out, read this fascinating story about rainwater and cisterns and how a resourceful community in West Virginia is harnessing this renewable resource that falls on our rooftops.  Find out how they use Multipure Water Filters to make it safe to drink.

I’ve been talking with three Bills down on the farm in West Virginia where they solved their problem of no running water by building systems called “cisterns” to catch rainwater for drinking and household use.  The three Bills are Bill Howard, Willie G, and Billy Jack, three of the original pioneers who started an intentional mountaintop community of like-minded souls near Charleston, West Virginia in 1973.  College-educated and progressive, mostly coming from places like Austin, Fort Worth, Texarkana and Louisiana, somehow interconnected in the pre-Facebook era.

I know the three Bills well because I, too, lived there and was one of the pioneers during those banner years of the back-to-the-land post-hippie movement.  I was there for the first three years when it was really primitive, and then moved to Boston to study acupuncture.  My memories are vivid.  I was married there and my first child was born there.  Today there are about 25 people living in 12 houses, mostly owner-built, straddling the last mile of a dirt, mud and gravel road which winds up, up and up 4 1/2 miles from a sleepy town down in the valley.  Nine of the original pioneers still live there.  Our love and friendship was deep and continues to be and I admire and respect them for the way they have maintained and cultivated that community.

When I lived there we had no paved roads, no electricity, no central heating, no indoor plumbing, and no running water.  We must have been out of our minds!  But we had a desire to learn and thrive, to gradually apply our muscles and our brains to create a community from the basics up.  Rather than trust my memories I decided to interview the three Bills to tell their story about how they moved from primitive to civilized, how they solved the essential problem of water.  The following interview is largely paraphrased, edited by me so some of the wording is not exactly the way they said it.  I have tried to be faithful to their story and retell it as best as I could (with their permission):
————————————————————————————————————————
In the early days, how did you get drinking water?

Willy G:  Our neighbor, Alfonso, about 1/2 mile down the road, had a hand-dug well he said we could use.  We used to go down there, haul up the water in buckets and carry it back to our houses, which at that time ranged from an old farmhouse to treehouses and tipis!
Billy Jack:  The top of the well wasn’t very secure.  Sometimes there would be debris in there.  One time we even found a dead rabbit in there, so we took it out and hauled out as much water as we could and then dumped some chlorox bleach in there.  We fashioned a metal cover for the well but the memory of the rabbit lingered.
Bill Howard:  I think we pretty much stopped using the well about that time!  Can’t really remember why–but it might have been because of that rabbit.  So instead, we went to the other end of the farm where there was a shallow spring, which meant there was a pipe coming out of the side of a small hill about waist-high and if there had been enough rain, water would run out of the pipe and into an old porcelain bathtub that Mose (a previous old time farmer) used to use a long time ago to water his cows.

We put a board on top of that bathtub and then placed our plastic jugs on the board under the pipe.  Sometimes the water was just coming out a trickle so we would go off and do some chore and then come back when it was full and then haul it down the road on our backs.  It was a lot of work for a little water…

Aside from being a real inconvenience, did you guys ever get sick from that water?

Bill Howard:  Now that you mention it, I do remember that during those first years we did have a lot of flu-like symptoms, sometimes diarrhea and cramping.  One summer I got sick for ten days and got so dehydrated I had to go to the hospital and get I.V. fluids.  But we weren’t testing the well water and we never knew if the water had caused this.

What led you to the construction of the first cistern ? (a cistern is usually an underground tank or reservoir to store rainwater.)

Billy Jack:  We hired a guy to come out and drill our own wells, but that first well didn’t produce enough water and the others were dry.  That’s a problem up here.  We are high up and at the end of the road and drilling for water is just a crapshoot and very expensive.  Then for a few years I collected rainwater off the roof in 55 gallon drums.  It worked off and on for a few summers but froze in the winters!
I wanted to put an addition onto my house with a bathroom and the first indoor plumbing on the farm —but we had no running water!  By then we had electricity so we decided to build a cistern to collect rainwater and put it under the addition.  Then we would pump the water though the pipes in our house.
Willie G:  For our house Pat and I bought a distiller from Sears and we used that for a while but it sometimes took 8 hours just to produce one gallon of clean water.  We needed a better way. .. Multipure.

How did you learn about cisterns?

Billy Jack:  Cisterns were commonly used generations ago, but no one around us was currently using one.  I just read up on it, pre-computer, but it is really a simple operation and once it is up and running it only takes a little maintenance.  I have had mine for 30 years.  Sometimes we get lots of rain so I just figured why not use this renewable resource?  Every household now has a Multipure filter as the final stage of filtration before drinking, so ultimately this whole approach has proven to be the  most economical, expedient and healthiest way to get water.

How does a cistern work?

Bill Howard:  First the rain hits the roof and runs down the gutters and downspouts.  Then it goes through some kind of pre-filter and then down into the reservoir which is the cistern.  We have an electric pump that pushes the water throughout the house’s plumbing.
Billy Jack:  In 1981 we dug a hole under my house and built the cistern out of concrete blocks, then lined it with a special sealant coating called Dam-Tite.  In the early days of my cistern I built a frame and in the frame were layers of rock, gravel and sand and between each layer was a window screen.  That was my pre-filter.  When the rain came off the roof it went through that pre-filter before entering the cistern.  Every six months or so I would clean and rinse out the pre-filter.
Willy G:  Now some of us buy a commercially produced prefilter out of Marietta, Ohio.  But before that pre-filter I have the water go through a woman’s nylon just to keep the leaves and the big stuff out.  Remember, this water comes off the roof where there are leaves and twigs and whatnot.  When the nylon gets dirty I clean it or throw it away.  I can’t really think of any other way to use woman’s nylons up here anyway.

Can you describe your cistern’s size and what is unique about yours?

Billy Jack:  We built that first one out of concrete blocks and coated the blocks with a lime-based substance called Dam-Tite that is supposedly non-toxic and seals it.  The rainwater around here is acidic so the lime alkalizes it a bit.  We wanted it to be big enough so we wouldn’t run out of water during the dry seasons so somehow we calculated all that and built an 8000 gallon cistern based on 100 gallons a day estimated usage for drinking, toilets, bathtubs & showers, cooking, clothes washing, etc.  We had to have enough storage to take us through the dry months.  But even with that, occasionally we run out of water and have some emergency water delivered to our cistern.
I also realized another benefit:  That much water stored underground maintains itself at a pretty constant 55 degrees all year long, which means that our basement is kept warmer in the winter and cooler in the summer.  It’s a heat sink.
Willie G:  That’s right.  I built mine under my entrance room to hold 4500 gallons and put my wine cellar next to it so it would maintain a more constant temperature.  When the kids were growing we needed more water so we had to be judicious in our use.  For example, I rarely used it to wash my car and Pat was stingy about watering the garden.  I should drain and re-coat the inside walls of my cistern every ten years, whenever that is!
Now all twelve households have their own cisterns.  Each one is customized:  different sizes, different pre-filters, different locations but they all use a Multipure at the kitchen sink to purify the drinking water.
Bill Howard:  I put mine under my house and workshop.  Mine is about 10,000 gallons.  Sometimes we have lots of rain but during a long dry season we need reserves.  Last summer, for example, I ran out of water.

What about bacteria?  How do you keep the cisterns clean?

Billy Jack:  I change my pre-filters every 6 months.  Twice a month I put a gallon of chlorox bleach in the water to prevent bacteria growth.  The Multipure filters out the chlorine before we drink it.  I like to say that on the first of every month I have to get my B-12 shot, give my dog Ollie his flea and heartworm medicine and put bleach in the cistern!
Bill Howard:  I put a quart of bleach in mine every three months to ensure disinfection.  Sometimes folks ask me if I worry about chemicals in the air coming down with the rain or about debris and rust from our roof, but I hope our pre-filter and Multipure will take care of that.

Any other unusual stories?

Bill Howard:  Well…a number of years ago I noticed that I had a bunch of mosquito larvae in the cistern water so I got some goldfish and put them in there.  Four or six of them, I recall.  I’m the only person I know that put goldfish in their cistern.  As soon as they hit the water, they started gobbling those larvae up!

Several years later when I went to drain and clean out my cistern and re-seal the walls, there were still two goldfish alive in there–about four inches long!   I once heard of two old ladies somewhere who put a catfish in their cistern. A few years ago I had the same mosquito larvae problem again and this time I put several four inch bluegills in there.  They might still be in there.

Willy G:  Danm!  Sounds like they could do double-duty.  First they eat the larvae and then, Bill, you could eat those bluegills or catfish!