Moses: Exodus Thru the Water 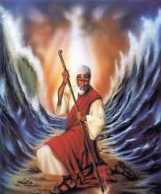 Both the Old and New Testaments abound with tales and parables that involve water.  Whether you view these Bible stories as factual history or as archetypal mythology, it is interesting to contemplate the primal forces at work and water is certainly one of them.  Coming at the time of Passover, this blog will look at the role water plays in the Hebrews’ journey from slavery to freedom.

As the story goes, there were ten plagues that befell Egypt and caused the Pharoh to grant freedom to the enslaved Jews.  Egypt was “plagued” by environmental and health disasters.  In the very first one, the water turned to blood.  Water, essential to life, was fouled and polluted, and from that the other nine plagues followed:  frogs, lice, beasts, pestilence, hail, locusts, darkness and then for a finale, death of the Egyptian first-born.   In our day we talk about global pandemics, about AIDS,  about global warming and about toxic chemicals in our water.  Plagues are not limited to just Biblical times.

Against that backdrop, Moses led the Jews out of Egypt to the Promised Land. But to get there, he had to go through water, the Red Sea.  What is the symbolism there?  Since the water had been polluted by the first plague, was the Red Sea also polluted? Thankfully the sea was parted and they were able to cross over on a “pathway” of dry land.  But they did go through the problem, not around it.  Maybe we have to”deal” with pollution to get to freedom and health on the other side.

Water is associated with birth.  When a baby is born it is born from a constricted water-filled environment and finally crosses over into the vastness of the external world.  Similarly, the Hebrews left behind the narrow constricted life of slavery and journeyed through water at great peril until they rose from the parted Sea onto the other side where they were free.  In order to get through it, the water “parted” or receded enough to allow them to survive.  Whether that was God’s doing or whether it was a function of well-timed tides and winds is something I will leave to your discernment.  In any case, the slave-nation was born again as free men and women when they reached the far shore of the Sea.

The word “Hebrew” is our translation of the word “Ivrit” (in Hebrew), which means  “crossing over” or “passing over.”  That’s what Moses and the Jews did.  We refer to them as Hebrews because they crossed over the Red Sea. They crossed over water.  People often explain the term “Passover” by saying it refers to God “passing over” the Hebrew homes and sparing their children from the tenth plague.  But another way to think of it is that it refers to the Hebrews passing over the Red Sea.

One final thought.  The first plague and the Red Sea were not the only encounters with water-related issues.  This was only the first step in the journey to freedom.  Over the next 40 years, the people wandered, settled, and wandered more, hundreds of thousands of them, through a forbidding desert environment where drinkable water was a precious and highly valued commodity.  How they survived this for forty years is truly a mystery to contemplate.