Is There Fukushima in Your Drinking Water? 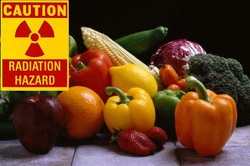 That depends where you live.  If you lived in Tokyo back in March 2011, yes.  Radioactive cesium and iodine were detected in the tap water at 18 municipal water treatment facilities.  Tokyo residents were told not to feed the tap water to their infants, and you can bet that millions of adults refrained as well.  Tokyo is 100 miles southwest of the Fukushima reactors which melted down and experienced  explosions as a result of the earthquake and tsunami.

I grew up in the 1950’s, on the East Coast of the USA and I remember back then the warnings about drinking milk.  At that time the US was conducting numerous above-ground tests of nuclear bombs and I remember the photos of mushroom clouds in our own country.  Scientists found evidence of strontium-90 that was carried eastward by wind currents and threatened to contaminate the grasses and grains that fed the cows who produced our milk.  I have often wondered how many health problems including thyroid cancers and many other cancers showing up now may have resulted from such exposures when I was young.

The tsunami in Japan took 20,000 lives and scientists estimate that the nuclear reactor failures will eventually result in more than 1000 deaths and countless non-fatal illnesses.  Scientists generally believe that the Chernobyl releases in 1986 were worse.  Nonetheless, Dr. Kodama (professor at the Tokyo Radioisotope Institute) said that Fukushima’s radioactive release was the equivalent of 29 Hiroshima bombs!

Water plays a key role in nuclear energy, and when things go wrong, water quality suffers not just locally but all over the world.  A twelve mile radius around the Japanese plant was declared a dead-zone and 80,000 people were evacuated, many have not returned.  Japan has shut down 51 of its 54 reactors.  Farm crops and fish are contaminated.  Radioactive water flooded into the Pacific Ocean in the largest release ever into the marine environment.  Radioactive particles in the atmosphere circled the globe and measurable levels were detected in Hawaii, Alaska, California, Oregon, New York State, Montreal, and Alaska!

The six reactors in Fukushima are called “boiling water reactors”.  Nuclear fission produces heat which boils water which runs turbines to produce electricity.  Water is also used to cool down the core and fuel rods so they don’t overheat.  In March of 2011 when the earthquake/tsunami struck, the power supply went down and cooling water could no longer control the heat and reaction.  Without water, the reactors melted down.  Hydrogen reactions caused catastrophic explosions at the plant and radioactivity spewed into the air.  Seawater was dropped by helicopter and pumped in to cool the reactor but much of it spilled/leaked out and flooded the landscape and the ocean where currents carried it around the globe, albeit much diluted.

Typically, when we think about water pollution we are thinking about chemical pollutants like pesticides, solvents and other endocrine disruptors entering our water supply and eventually our bodies.  In the same way, we should pay attention to radioactive pollutants.  These particles are persistent with half-lives measured in hundreds and thousands of years.  Plutonium has a half-life of 250,00 years.  Once released, it will persist for that long before it loses just half its potency.  How lethal can you get?  We know that exposure can cause cancer and genetic mutations.

As proven by Three Mile Island, Chernobyl and Fukushima, accidents DO happen.  And they have consequences, forever.  This is not a technology that is safe.  Rather than splitting the atom for electricity or fracturing the Earth for gas, we should be pouring our considerable resources into harnessing the non-polluting power of the sun, the wind and the tides.  The true cost of nuclear energy far exceeds the true cost of renewaables when you factor in the potential for catastrophic ecological disasters.

Aside from this call for citizen/consumer pressure against nuclear and for renewables, what can you do to protect yourself and your family?  The EPA and NSF are engaged in ongoing research to better test for such contamination and the performance of various filtration technologies.  While no NSF certification standards have yet been formulated, the EPA does promote “reverse osmosis” as being the best treatment.  In addition, solid carbon block filters that can take out lead are also likely to reduce the radiocative particles in drinking water when they filters are serviced regularly.