“I LIVE IN MULTI-PURE WATER…YOU ONLY GET TO DRINK IT!” 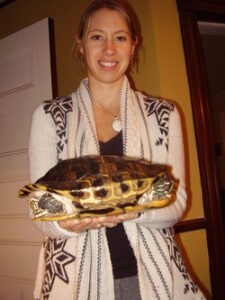 We know that drinking pure water is essential for health.  And it is even more important for pets who live in Multipure Water!  My daughter, Theresa, and I have watched Hetzel thrive for ten years and grow from the size of a small dime store turtle to a full grown red-eared slider the size of a dinner plate and requiring two hands to pick up.

Theresa bought two small turtles at a street fair in Boston’s Chinatown and took them back to her dorm room while she was in college;  “Hetzel” & “Petzel”, named after a legendary Yiddish Moving Company in Baltimore.  Petzel disappeared one day   without explanation, but with proper care, light and an aquarium full of Multi-Pure water, Hetzel has continued to grow and outgrow aqarium after aquarium.

Red-eared sliders are the most popular pet turtles in the US.  Most die in the first year, but those who survive can live 30 years or more.  They are aquatic, living mostly underwater, but love to bask under warm light.  They are named for a red patch of skin on the side of their heads and the way they slide off their basking rock into the water when they get scared.  Hetzel mostly eats turtle pellets, but since they are omnivores, she also enjoys a chunk of turkey, small livefish, earthworms and an occasional piece of gefilte fish.

For years we thought Hetzel was a “he”.  When Theresa noticed that he was uncharacteristically moody and grouchy, she decided to take Hetzel out to get some exercise in the yard. Hetzel made a beeline to the garden and began to dig furiously with his back legs.  Eventually, when Theresa went over to examine the hole, she discovered that “he” had laid twelve small infertile eggs one on top of the other, into a ten inch vertical shaft. We quickly readjusted our gender assessment to “she” and now Theresa encourages Hetzel to walk around freely outside in the back yard for exercise or just in case…

And you thought Multipure was just for drinking!