Flint is gone from the headlines. Newscasters are on to new stories. But for the children and adults in Flint, the problem of lead poisoning from their water remains. Lead pipes underground are still there. People are still afraid to drink water from their taps. I know because I have seen it firsthand. I was there in May 2016 with seven other Multipure folks to oversee the delivery and installation of 77 donated Multipure systems under the auspices of the Pure Foundation.

This was the most powerful and touching day in my 31 years as a Multipure Distributor.  In this blog, I would like to give you an eyewitness account of our time in Flint.  Let me begin by sharing a short two minute YouTube video so you can see this project with your own eyes:

Our primary focus was the Flint Boys and Girls Club.  Housed in a one-story 1950s-era elementary school, this club serves hundreds of families and children in a community that has great needs.  Formerly home to thousands of workers employed by the auto industry, unemployment in Flint is catastrophically high. Crime is among the worst in the nation.  I had planned on going jogging our first morning there but was discouraged because it might be dangerous.  Poverty abounds.  There is no longer even a supermarket in Flint; residents have to travel to another town just to buy groceries.  The neighborhoods we saw consisted of  one or two story wood frame houses, many old and worn down.  Every fourth house seemed to be either boarded up or vacant.  Windows broken.  Plywood over empty door frames.  Built for a working class that used to have jobs with the auto industry.  Black, white, Latino.  And all had a pressing need: Safe water. 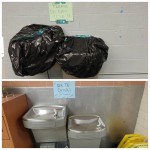 When we arrived at the Flint Boys & Girls Club, our mission was clear.  We were there to install about a dozen Multipures so they wouldn’t have to use bottled water.  For more than eight months, the kids and adults had not used the tap water because of lead.  Imagine running programs for 200 kids with no running water.  The first thing we saw was a water fountain mounted on the hallway wall covered over with big black plastic garbage bags and a sign saying “Do Not Use!!” 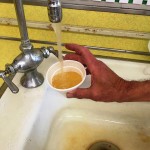 Then we went to a classroom area with a sink.  We turned on the water to do a lead test and as soon as we filled a cup we saw that the water was rusty orange. An intense orange, almost like old paint or stain.  In many of the rooms and hallways, bottled water was stacked from floor to ceiling.  One-third of the auditorium seats were filled with crates of bottled water.  Signs everywhere to remind the children to recycle the bottles.  Recycling was more than slogan; it was a necessity.

Also stacked in the hallway were 77 Multipure Drinking Water Systems.  Donated by distributors around the country, these units are NSF-certified to reduce lead and provide the safest possible water.   We spent most of the day installing them at sinks, in the office, in the cafeteria, in water fountains and icemaking machine—everywhere people would need water to drink.   We had to be careful because corrosive water made much of the plumbing and valves brittle.  We were constantly turning the building supply off and on and running around with walkie talkies to make sure our work was leak-proof.   After ten hours of work, seven runs to Home Depot for parts and one run to Subway, we were done with those jobs.  At the end of our day, I walked up to the water fountain where Kenton had laboriously mounted dual Multipures after working on his back for 2 1/2 hours.  I bent down and took a drink of clear, delicious Multipure water.  It was a sublime moment. 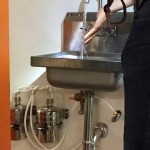 While we were working in the Club, four of our group were out in the community, driving around to homes of club members delivering the rest of the free Multipure systems.   I didn’t get to do that because I was under a sink installing at that time.   But I remember when they returned with their stories.   And their photos.   Sue took out her smartphone and began to show me pictures.   I welled up with emotion as I saw families and Pure Foundation folks standing together on their porches or in their driveways holding up their new Multipure Filters.   She told me how children saw their van coming down the street and joyfully sped home on their bikes to alert their parents of the impending gifts. 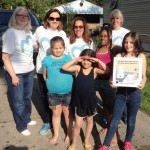 For these people, living without safe running water for so long, life was “surreal on an everyday basis”.  Many had garages full of bottled water, crates of little 8 ounce bottles that they had been using for all their drinking, cooking and yes in some cases bathing. When I saw those pictures of faces beaming holding up the Multipure box, I broke down and cried.  I am even now, months later, tearing up at the memory as I write this.

Not only were the drinking water systems donated freely from distributors around the country; the Pure Foundation is going to provide each and every one of them with free filters FOR LIFE.  That’s right.  At least once a year, Multipure will send a replacement cartridge forever.  Now that is a truly a gift that keeps on giving.  Thanks to Multipure, thousands of people will now be able to drink the water without fear of lead poisoning.  Hundreds of children a day at the Boys and Girls Club will be able to run and play and sweat in the summer heat and drink clean water to quench their thirst.  No more bottles.  No more waste. No more fear.

Tauzarri Robinson, CEO of the Boys and Girls Club, knows how important this club is because he grew up attending such a club.  He lives in the community and has lived this nightmare.  He was overjoyed when we had completed our work.  As I led him around the building to see the various locations, he told me he had been watching a PBS documentary about life in some impoverished Third World countries.  When the reporter talked about the problem of getting clean drinking water, he realized that indeed, living in Flint was like living in a Third World country.

There is much work to be done. What we accomplished was huge, but it is just a proverbial “drop in the bucket”.  Not only in Flint, but in many other places around this country.   Newark, Boston, Portland and many other places have found lead in the daycare centers and nursing homes,  schools,  hospitals and houses.  Multipure is one way to reduce that threat. It may seem relatively insignificant to “only” provide 77 systems, but remember that each one could prevent someone from being poisoned.

There is a famous saying in Jewish teaching from the Talmud that bears repeating here. It addresses the importance of doing what we can and cherishing each and every life. “Whoever saves a life, it is considered as if he saved an entire world.”

I will never forget my visit to Flint.