Firewater at the Hetch Hetchy 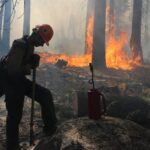 One More Reason to Use a Multipure Filter

At first I was mesmerized by the name.  Hetch Hetchy.  I heard it when listening to news coverage of the recent horrific wildfire in and around Yosemite.  Bigger than the city of Chicago, the Rim Fire was one of the biggest forest fires in California history.

Ash is falling into the lake, raising turbidity levels (particulates).  If those levels get too high, the reservoir will have to be taken offline.  No more Hetchywater for San Fran.  Currently most of the ash is near the surface, and since the water intake pipes are more than 200 feet below the surface there is no immediate problem.  But officials have taken the precaution of shutting down two major hydroelectric plants and diverted water to secondary reservoirs just in case.  Water monitoring has been increased.

Of equal concern is the possibility that in the winter and spring, melting snow and rain may cascade down barren, eroded, deforested slopes bringing lots of ash and organic matter into the streams that feed Hetch Hetchy.  In addition to turbidity, this will introduce humic acid which can lead to a problem with THMs and other chemicals and will require additional treatment and filtration.

I got to thinking about another issue:  You know those planes you see on TV that swoop down and drop a red liquid slurry on the fire.  What is that?  And where does it go?  What they drop is a mixture of flame retardants and water, a chemical brew of phosphates, sodium borate, ammonia fertilizer and aluminum compounds that slows the fire but has potential polluting effects.  Those retardants can drift into the reservoir or be carried down to Hetch Hetchy with runoff from feeder streams.

Flame retardants?  Chemicals?  Here’s a quote from Wikipedia:  “Forest fire retardants that are used are generally considered non-toxic, but even less toxic compounds carry some risk when organisms are exposed to large amounts.  Fire retardants used in firefighting can be toxic to fish and wildlife as well as firefighters by releasing dioxins and furans when halogenated retardants are burned during fires, and drops within 300 feet of bodies of water are generally prohibited unless lives or property are directly threatened.” (USDA Forest Service Wildland Fire Chemical Systems, 2008).

In her 2011 article in the High Country News, Judith Mernit asks an interesting question:  “What’s worse for the forest:  wildfires or the chemicals dropped from planes to stop them?  Its a dilemma:  Retardants kill fish, contaminate aquifers and fertilize noxious weeds, but left unchecked fires destroy homes, wreck some habitats, ruin views and, worst of all, kill people.”

We have seen this before.  Nature goes on a rampage and our water supplies are threatened.  Think of fires (Rim Fire), earthquakes (Fukushima), and floods (Sandy and Boulder).  These events occur.  Are you prepared?  Can you say your water supply is protected?

To protect your family, install a Multipure filter.  You will be safer.