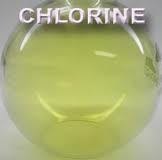 Chlorine is an element with the atomic number 17.  It was named after the Greek word “khlorus,” which means greenish-yellow, as it appears in the photo in its gaseous form.  It has both toxic and disinfectant qualities.  For example, German soldiers first used it in World War I as a chemical weapon in 1915 before the advent of mustard gas.  The chlorine weapon hung low to the ground and caused acute respiratory effects, burning, injury and death on the battlefield!

It was first put in London’s water supply in 1850 to kill the microbes after a cholera outbreak. Chlorine binds with and destroys the outer surfaces of bacteria and viruses.

So chlorine is a double-edged sword.  Present in about 90% of public tap water, this chemical should be the first thing people think about when they consider filtering their water.  Municipalities treat water with it because it greatly reduces the levels of bacteria and viruses and that is a good thing. It is also used in swimming pools and the disinfectant properties of chlorine bleach such as Chlorox are well-known.

However, chlorine treatment of drinking water creates both esthetic problems and carries major health risks. It can impart a very unpleasant smell and taste, often a metallic after-taste.  Restauranteurs have long countered this by adding a slice of lemon when they serve tap water to their customers to cover up the taste.  I am always reluctant to drink water when I see a lemon dropped in my glass!  Many people can smell the chlorine fumes in their shower or when they swim in a pool.

What are the health risks? Chlorine combines with decaying algae and other plant life such as leaves and twigs in the reservoirs, rivers and pipes to create dangerous disinfection byproducts (DCB’s)  Also known as THM’s (trihalomethanes) and HAA’s (haloacetic acids), these substances are found widely in public chlorinated water.  DCB’s have been linked to a high increased risk of many cancers such as bladder, rectal, colon and breast cancer.

Robert Morris, a researcher at the Medical College of Wisconsin, reported results of major studies in 1992 that concluded that chlorine byproducts increased bladder cancer risk by an average of 21% and rectal cancer 38%, translating into 20,000 new cancer cases a year!   University of Birmingham (UK) reported in 2008 that another risk was the harm done during pregnancy to developing fetuses, with increased incidence of birth defects, miscarriages and even stillbirths.

And while chlorine is effective in reducing bacteria and viruses, it is much less helpful in killing protozoan cysts in the water.  Giardia Lamblia and cryptosporidia hae a tough outer shell that makes them somewhat chlorine-resistant.  Their presence in drinking water can have dramatic effects:  Milwaukee in 1994 experienced a major outbreak of cryptosporidiosis in which 400,000 people were sickened, 4,000 were hospitalized and hundreds died.  Immunocompromised populations are especially vulnerable:  HIV-AIDs patients, elderly, transplant, dialysis patients, children and people on chemotherapy.
Authorities are aware that high levels of chlorine generate unacceptable health risks from the disinfection byproducts. In many places they have attempted to bring down these risks by replacing chlorine with a combination of chlorine and ammonia.  This combination, however, generates a new compound called Chloramines which may also have negative health effects.

Multipure’s solid carbon block filter is the only filter on the market which carries NSF certification for all these contaminants:  chlorine, chlorine byproducts, giardia, cryptosporidia, and chloramines.

How do you know if Chlorine and Chlorine By-Products are in your Drinking Water?

You can contact your local water utility or read your local consumer confidence report to find out if your water is chlorinated.  If it is public water rather than a private well, and paricularly if it is from a river or reservoir, the liklihood is great that you do have chlorine and its byproducts.  Here’s a do-it-yourself way to determine if your water has chlorine in it:   a simple test that uses a chemical indicator called OTO which can be purchased from Multipure or your local pool supply store.  Put a few drops of this clear chemical into a white cup full of tap water.   The OTO will react in the presence of chlorine, turning the water yellow.  The white cup just makes it easier to see the coloration.