Bottled Water: thumbs up? or thumbs down? 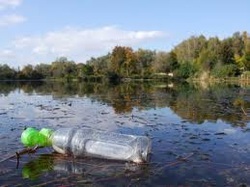 Bottled water has gotten a lot of bad press lately, but before I join the pack in condemning it outright, let me tell you what I like about bottled water:
(1)  It’s great during water emergencies.  Just ask someone who endured the earthquake in Haiti.  In a pinch, or when travelling, it’s usually better than tap.
(2)  For the most part, bottled water is chlorine-free and tastes good.

But overall, thumbs down.  Environmental groups, college campuses (UVM the lastest), government agencies and municipalities (SF) are in agreement that bottled water is harmful to the environment and not always as “pristine” as advertised.  A  plastic bottle of water takes 3 minutes to drink and 1000 years to degrade.  It costs 1000 x more than tap water, and if you do the math you will see that it often costs more per gallon than gasoline!  With its images of  mountain springs and crystal clear lakes, Madison Avenue created a multi-millions of dollar windfall for bottlers like Pepsi, Coca Cola and  Poland Spring.

Despite the image on the labels, it ain’t necessarily so.  30%-40% of bottled water is not from the mountains.  It is merely reprocessed, filtered tap water.  Pepsi’s Aquafina, for example, is made from the municipal tap water near Fort Devons in Ayer, Massachusetts.  Whereas tap water is regulated by the EPA and undergoes hundreds of tests per month, bottled water is overseen by the FDA where resources are limited and testing  much less frequent.  And the FDA only oversees bottled water which crosses state lines.  70% of bottled water thus escapes even that oversight.

In 1999 the NRDC (Natural Resources Defense Council) sampled 1000 bottles from 103 brands and discovered that 22% had contaminants above the state standards and fully 1/3 had at least some measurable levels of those contaminants.  EWG (Environmental Working Group) did similar research and found traces of arsenic, DBP and 36 other pollutants.  Chemicals like BPA, phthalates and PET leach into the water from those five-gallon plastic bottles universally used with water coolers.

Everything about the production, transportation and disposal of the plastic bottles wreaks havoc on the environment.   Fossil fuels are burned in the production of that plastic.  Gasoline is used to transport the water to market.  Each year, that is enough oil to fuel 200,000 cars. And once we drink the water, 80% of those bottles are not recycled but end up in landfills or along roadsides or in the oceans where they last for 500-1000 years before degrading.  Each year we discard so many plastic bottles that if they were placed end-to-end they would go around the planet 149 times.  Each day we use enough plastic bottles to bury the island of Manhattan one foot deep. Each day!

You know where this is headed!  If you want to make the better water choice, forget about spending your money on those bottles.  Instead, make your own clean water  in your own home by using a Multipure Water Filter.  It is less expensive, more convenient, healthier, and better for the environment.  It uses solid carbon block technology, which comes from coconut shells, a renewable resource.  That’s why we say “black is the new green.”